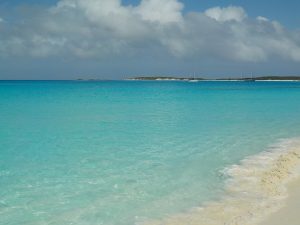 World’s away from winter in the States!

After taking on basic provisions at Clarence Town and experiencing the sand bores, shallow bay and blue holes, we made a brisk sail to Rum Cay, anchoring well before dark in Port Nelson. Again, the reefs were severely damaged by hurricane Joaquin about four years prior. My log notes from the past mentioned Port Nelson was a rolly anchorage and by golly, we found it the same. We employed a stern anchor to hold bow into the waves, but in the night, it being just too small for the job, drug and we rolled relentlessly until low tide. 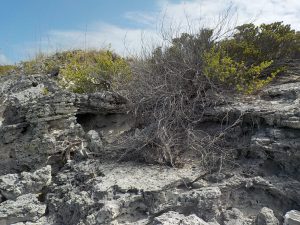 Beware the sharp ruggedness of the coral based shoreline.

Not wanting another day and night of this roll, we sailed and fished to the northwest corner of the island, Flamingo Bay. Navigating through the coral infested shallows in the driving rain was very dangerous. with only a foot under the keel and water breaking coral leaving only narrow passes, often less than half a boat length apart. However somehow we avoided collision or grounding and tucked in as far east as possible just south of Pee Wee Point, finding a spot with inches under the keel and room to swing. If not for the allure of a calm anchorage, we would not have attempted this, especially in the rain, but we did and rewarded with our most comfortable anchorage in weeks. It was just too scary to take pictures as a reminder. I may never pass this way again, but if I do, I will exercise extreme caution in bright sunlight without driving rain. 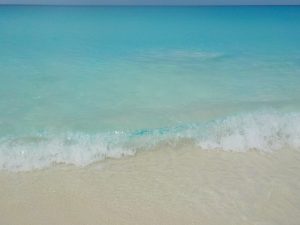 Ahhh! The pristine beach is soft as velvet to your toes as the crystal pastel waters entice you.

In the morning we sailed onward to Conception Island, fishing as far as we could outside the realm of marine sanctuary but caught nothing. We anchored is the breath taking West Bay for three no-roll days and nights.

Again the reefs are quite damaged. All our anchorages from Jumentos to New Bight, Cat Island had sharks hanging around the boat. However, frolicking porpoises welcomed us into New Bight, so we are not expecting sharks. The bight of Cat Island has good depth and a pleasant lack of coral heads, good sand holding with a few dark but deep hard patches. We’ll stay here through Monday at least to see the Hermitage and get some basic groceries as possible. Derek hooked a tiny Mahi Mahi near the Tartar bank, but we set it free. Unfortunately he did not hook any Wahoo, Tuna, or bill fish, but we still have some Mahi Mahi in the freezer.