We headed for the Jumentos and Ragged Islands after leaving Georgetown, Exumas, planning to take the shallow Crab Cay cut at high tide. Although the cruising guides and charts indicated we’d have 1 foot under the keel, we did not find it so. We gave it our best try in a couple places as advised we were uncomfortable with less than 1 inch under the keel. Thus we took a longer path, some 18 miles longer and found the Comer channel to work very well for our 5’6″ draft. Even with the longer distance, we arrived at the Flamingo Cay anchorage before dark. Arrival at our intended Water Cay would be after dark. The following morning we made the short sale to Water Cay. 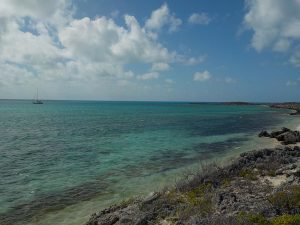 We found the Jumentos and Ragged Islands to be very rugged. The recent hurricanes that ravished these islands made them appear to be virgin territory, however much of the coral and reefs were damaged. Sharks were abundant as well as barracuda. We did find some spiny lobster, conch and a very fat Lion fish which all joined us for dinners.

There is nothing on the islands for supplies, fuel or water, so whatever you need must be brought with you and carried out. We found some uncomfortable swell in most of the anchorages but managed to find a couple that were pleasant at night and protected from 35 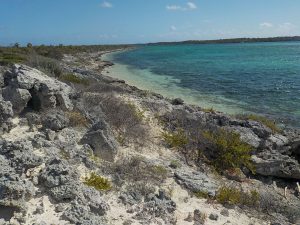 knot winds lasting for a few days. I went ashore at Buena Vista Cay to explore some and found a very rugged sun baked shore. There were thousands of shoes as well as other hurricane debris, clothing, suit cases, purses, plastic containers, etc. strewn all over the weather side of the islands,  in this chain7.apparently carried there by past storms. Ragged Cay in the very South is the only populated island in this chain. It was evacuated after the last hurricane and is now coming back to life. We did not stop there, but finding favorable weather to finally sail Northeast to the southern tip of Long Cay, we chose to leave from Double Breasted Cay at daybreak. Once clear of the rocks and reefs and a ways out off the banks, we enjoyed a fast close reach with SSE winds. 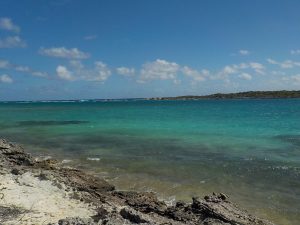 There was a moderate swell coming in from the SE as well, but Fin settled in nicely for the passage. 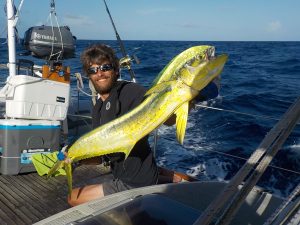 Derek caught his 1st Mahi Mahi, a whopping 50 inch long fighter about half way across the Crooked Island Passage just north of the Columbus Bank. Yeah baby! Take a good look at those grins! He also hooked a couple large Barracuda. He reeled them in but we released them. Ciguatera is still prevalent in the Bahamas.

Arriving at the southern tip of Long Island we had to motor in light winds against a heavy swell from the North Atlantic. Entering the narrow and tricky harbour of Little Harbour just as the sun set and at low tide. Breakers were on either side as the heavy swell shoved us in. No place for mistakes. The water was beautiful and crystal clear, but Fin rolled all night as the swells came over the reef. Unfortunately, the better spot had been taken by others before our arrival. Life is good though.

The next morning, we continued on our way to Clarence Town for fuel, water and provisions, just a few miles North. We had a lot of high winds and heavy seas for many days, trapping us in the Raggeds. In many intricate spots behind islands we had only inches below the keel. Waiting for the right weather paid huge dividends. Although a long and tiring transit to Long Island, we enjoyed the sail immensely. We arrived with nearly 20 gal of diesel to spare but less than 10 gal water. We took on fuel and water at the very clean and friendly Flying Fish Marina. While Clarence Town has grown some since my last visit some years past, it remains a quaint little town filled with friendly people. Basic provisions can be found here in limited quantities, but the mail boat arrives each Thursday. Some locally grown fresh vegetables may be available on Wednesday at the Gov’t wharf. There are several amazing blue holes nearby, one 664′ (202 meters) deep where International competitions are held. The sand bores in the south end of the bay are very interesting to explore. In 2015, Hurricane Joaquin devastated many areas of the Bahamas, including Clarence Town, causing much damage to coral reefs and their fish populations. This is the main reason our fishing is considerably short on catching. The clarity of the water, its pastel colors and quality of beaches remain breathtaking at every turn.