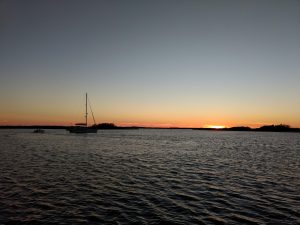 On Dec 15, with provisions, fuel and water aboard, Fin slipped the lines from Yacht Haven Marina in Morehead City, NC shortly after 10 am. Our plan was to continue down the ICW as conditions in the Atlantic were still too rough from the weather system that passed during our stay in Morehead City. By 17:00 we were anchored in the still waters of Mile Hammock Bay just in time for this beautiful sunset. We opted to stay inside the ICW as we passed Masonboro Inlet, and continued out the Cape Fear River Inlet, avoiding Frying Pan Shoals and the extra distance we would have to travel to round them. 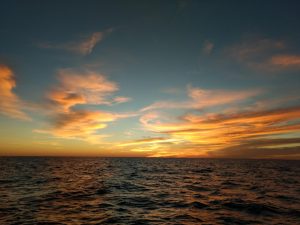 By this time, the Atlantic was calm, providing us two peaceful nights at sea. How blessed we were to avoid nasty weather again. Our spirits soared as dolphins showed us the way to warmer climes. While we saw a few waves, several dolphins, ships, and mild salt spray, we never saw a drop of rain although the nights were still cold. Fin sailed masterfully with tail winds all the way to Brunswick, GA. 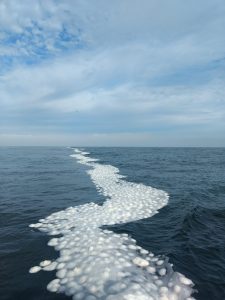 Strangely, there was a vast, long suds line from the Brunswick entrance which we mistook as a shoal from a distance. I’ve never witnessed such a suds line, but I suppose there must have been some reason for it. 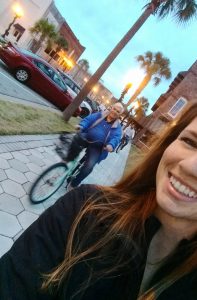 ugh to explore the quaint historic town. Yes, we enjoyed the town by bicycle, did load upon load of laundry and had a nice rest until time to leave port again.