Following is the beginning of a brief log of sailing vessel Fin with Captain Derek, first mate Christina and myself as experienced crew. Fin is a well equipped Perry designed Norseman 447 cutter rigged sloop. We hope you enjoy this shakedown cruise to the Bahamas and escape from East coast winter as much as we do. 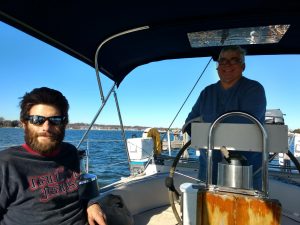 Starting Monday, Dec 3rd, S/V Fin motored all night down the Chesapeake Bay on a rather warm winter day from Tracey’s Landing to Norfolk and then immediately continued into the Virginia cut portion of the ICW. Despite a 4:00 AM pre-dawn arrival at Norfolk, delays until 12:30 PM at the first two bridges (Gilmerton and RR bridge #7) prevented us from reaching our intended destination, Coinjock Marina at mile mark 50 in the first leg and instead, tied up to the free dock at Great Bridge, VA, just after transiting the locks there. 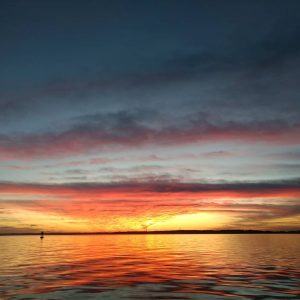 Sunset over a calm Chesapeake Bay

A nice walk ashore to explore the small town helped to restore our land legs. It was so nice to have a warmish day to start out, but it quickly turned bitter cold. I baked some cornbread and made a Quinoa dish with mushrooms, carrots, onions and Kielbasa sausage for dinner. By early afternoon on Dec 6th, we tied up at Coinjock Marina, NC. Warmth to the cabin was restored via small electric heaters and shore power. Christina exercised her wonderful culinary talents for the hungry crew. Derek immediately went to work on boat projects. Both are great travel companions and I am delighted to join them. Fresh hot Hollywood showers were enjoyed by all! Yeah. The next day, in bitter cold with frosted decks, we departed Coinjock at dawn, transiting the Alligator River bridge by noon and anchoring in the lower dog leg of the river about 400′ North of the marked channel. The shiny new anchor and chain were christened in 7′ of water with a sticky black mud bottom. The short legs allowed us daytime navigation of the narrow channels but cost us an extra day. It was well worth the trade. As we awoke at anchor, a huge barge, bigger than any I have seen on the ICW was heading South with two tugs a pushin’. I was very relieved to see them enter the tiny cut we would also be entering shortly ahead of us, in the same direction. They were very kind, slowing as they passed us at anchor, unlike the delivery captains of two new Hinckley power boats at full cruising speed and max wake we would encounter later. 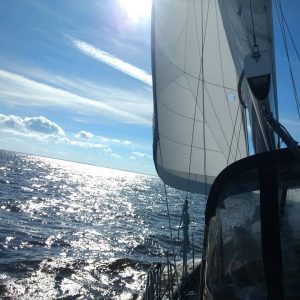 Crossing both Albemarle and Pamlico sounds was uneventful and eerily calm, at least for me. That is until we turned up the Neuse River, when a long fetch produced some roll inducing waves, which we quickly countered with a deployed genoa, our only chance to raise sail for this leg of the journey to the Bahamas. By Saturday, Dec 8th, were were navigating Adams Creek with the current, sliding our way into the side channel and by 2 PM backed into a nice wide slip at Morehead City Yacht Haven, NC, just as a light rain was starting. Fin is snug and safe in a protected slip until the approaching winter storm passes.. Cheers! we logged our first segment of our journey.

After careful measurement, guessing and approximation arithmetic, we determined (more like an educated guess) Fin’s air clearance to be 63.5′. That is including the 2′ of VHF antenna soaring above the wind vanes.Nevertheless, this fact makes us extremely nervous while passing under some bridges with 63′ water marks. I wonder, does it help to lower our heads below our shoulders? Remarkably, Fin never spanked any bridges.

So far only a few minor problems on Fin, like refer pump refusing to pump at times, corroded electrical connection at bow light, popping off the engine coolant cap, engine alarm malfunction, and other minor electrical issues. Nothing out of the ordinary for a new passage. Derek installed the new chart plotter just in time for the ICW transit. Very nice since we do not have paper charts of the ICW South of Maryland. We were using the Navionics app on a phone until the plotter was active. I must say, the new plotter works quite nicely so far. It is clear and easy to read with my degrading and uncorrected eyesight.

Cheers from Fin, and a Very Merry Christmas to all,