In a previous post, I wrote about the process of making a mold using the old rudder. With the rudder mold now made, the process of making the new rudder can begin. First the mold halves are waxed and polished to protect them. The flanges on the mold were made large enough to accommodate a sealing tape for vacuum bagging. 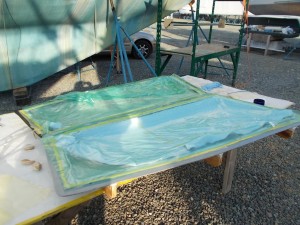 The vacuum bagging process produces a high quality compressed layup of glass and resin, free of voids. Because we are using 3 layers of 1708 glass and a layer of surface veil with vinyl-ester resin, we must perform the layup in two sessions. 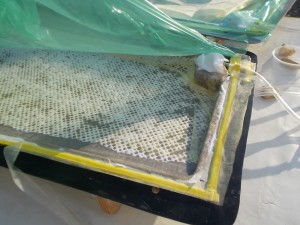 In the first layup, a light coat of resin is painted into the mold, followed by the surface veil and more resin. Then the first layer of 1708 glass is applied and thoroughly saturated with resin. On top of this, a layer each of nylon peel ply, breather cloth and bagging film are applied. The bagging film is sealed to the mold flange and the vacuum pump turned on, evacuating the air between the bagging film and mold, thereby compressing the layup tightly. Both halves of the rudder are bagged in succession and allowed to cure. Excess resin is absorbed into the breather cloth as you can see in the photo. 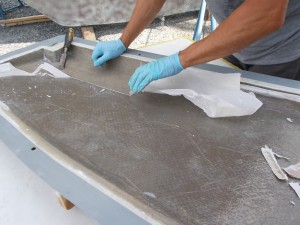 When cured, the vacuum is turned off and the bag opened. The layers of breather cloth and peel ply are removed and the second layup of two more layers of 1708 glass are applied and saturated with resin. Peel ply, breather cloth and bagging film are again placed over top and sealed to the mold flange. Vacuum is applied until the layup is cured. After the second cure, the rudder skins are ready to clean up. 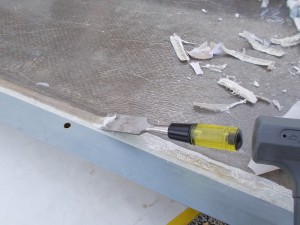 The edges are trimmed, skins removed from the mold and edges sanded until they fit together perfectly. The new metal shaft with welded tangs is coated with PVA mold release and placed into one of the skins, using the mold to hold the shape. 16 pound density foam is mixed in small batches and poured into the rudder skin and around the metal. 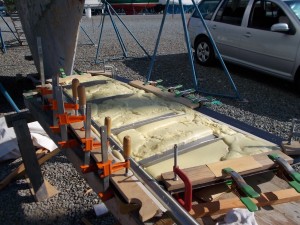 Small batches of pour in foam are made to limit the amount of heat generated in the foam hardening process. It is surprising how much heat is generated in the foam chemical reaction. So much heat, that it could destroy the skins and mold if poured in a large batch. The foam chemical process is very fast… 15-20 seconds for mixing and another 20 seconds to complete the pour. Within another minute, the foam has expanded and become too hard to move around. After a few minutes, another small batch of foam can be poured, being careful not to apply too much in warm areas. It is best to allow the foam to cool some before over coating with more foam. 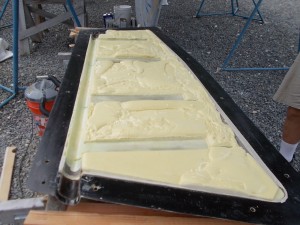 Foamed rudder half with metal removed

We only want to fill the rudder skin to the centerline, half the rudder thickness, however it is impossible to judge how much the foam will expand, so when the pour is complete, the metal is removed and the excess foam trimmed off with a long saw. We made the saw using a portion of a band saw blade. We tried to cut the foam with a hot wire, but the foam is too dense for that technique. 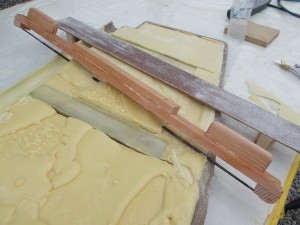 After the foamed skins are trimmed flush to the centerline and the parts again fit perfectly together, they will be placed back in the mold halves, coated with resin for bonding together, metal installed, and halves bolted together to cure. Lastly the rudder edges will be taped together with fibreglass tape to seal the edges and sealant applied to the recess cut into the ends of the rudder to seal the shaft. After final sanding, cleanup and paint, the rudder will be ready to install. 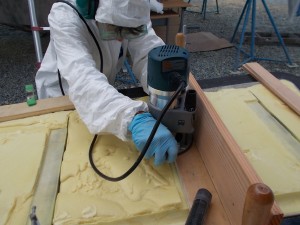 We found the band saw blade to dull quickly, so after some creative thinking we decided to trim the foam using a router with a wooden jig to mill the surface flat with the edges of the rudder. Still, the process took all day to complete and revealed some low places that must be filled more and trimmed again. Just another step in a long process. The halves fit together perfectly as we planned, so we are encouraged with a good outcome. 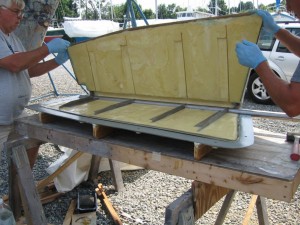 The next day, we bonded the two halves together. The mold halves were coated with PVA mold release to prevent them from bonding to the rudder skins when excess epoxy oozes from the glued seams. Epoxy thickened with Cabosil TS-720 was painted onto the foam of one half, the metal inserted into this half, then the other half was painted with thickened resin and the two halves married, pressed between the mold halves. Bolts and clamps hold the halves tightly together until the epoxy cures. Although the rudder skins were made with vinyl-ester resin, we choose to use epoxy to glue the halves together because the working time of the vinyl-ester resin would not be long enough to complete the assembly process. The epoxy resin allows more working time. 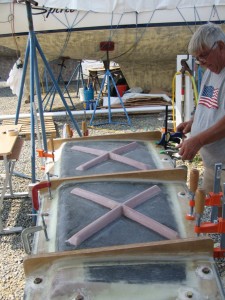 When the assembled rudder is cured and removed from the mold halves, the edges will be sanded and fibreglass tape will be wrapped around the perimeter of the seam using vinyl-ester resin. Reliefs designed into the top and bottom of the rudder where the shaft exits will be filled with 3M 5200 to ensure a good water tight, yet flexible shaft to rudder seal. It is believed that this will delay water intrusion into the rudder better than any other option. 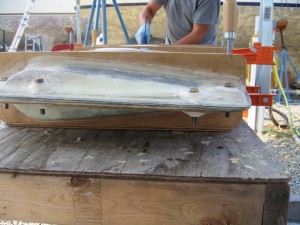 This entry was posted in Fleet of Boats, Maintenance Tips, Rudders, Spirit. Bookmark the permalink.