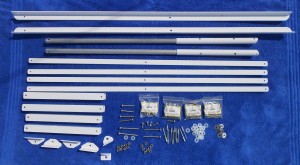 All the parts necessary to make one adjustable bracket for two panels.

I have worked on the design and fabrication of the adjustable solar panel mounts for more than two months, on and off. The number of parts is staggering considering this seemed such a simple idea in my head. In the first picture we see all the parts necessary to make one of two mounting brackets, holding two solar panels. A two panel array is located on either side of the boom as can be seen in the next three pictures. The panels overhang the sides of the dodger roof by 2 inches when collapsed and cantilever up and out when extended, giving them unobstructed sun. The main sail cover would partially shade the panels in the retracted travelling position. Although the boom looks very close to the panels, it will be raised a little more when the sail is on and covered. 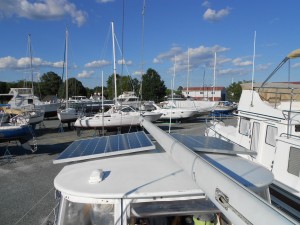 Just moving the panels outward away from the boom was not a good solution because of the limited height and danger of banging my head while boarding the boat or moving along the decks. They had to raise up about 10 inches to clear my head. I must pad the sharp edges of the panels to soften the blow. As you can see, the panels fit very close to the boom. The mainsail cover will likely partially shade the panels in this position. While at anchor or at a dock, the panels can be lifted and moved outward with a lift and tug. The brackets lock into two raised positions. With the panels extended you can clearly see the “light” (window in top) which allows the helmsman to see the main sail trim and wind vane at top of mast. Notice the panels are not oriented flat in one plane. This allows rain and condensation to run off the edge and keeps the panels cleaner between washings. The angle is greater with the panels extended. 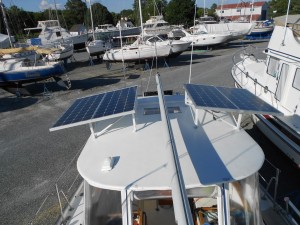 It was a difficult decision to decide where to mount the panels, further forward or back. Before drilling holes, I placed the panels on the roof and walked around the boat. I found it was better (less likely to bang my head or face) located about two feet forward of the back edge of the roof. This allows plenty of room to stand on the roof in front of the panels if needed to attend the mainsail. Originally I planned to mount them about a foot forward of this position to not block the helmsman’s light. I discovered I was more likely to bang my face into a sharp corner of the panels when walking forward from the aft deck. Moving them aft provided more safety. Ideally, the panels would not overhang the dodger at all, but it was not possible with this choice of panels. Another drawback, when in the retracted travelling position, the panels occlude about 60% of the helmsman’s light, however the top of the mast and main sail trim can still be easily seen. Now that the panels are mounted, they can be wired into the electrical system. 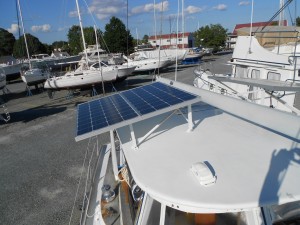