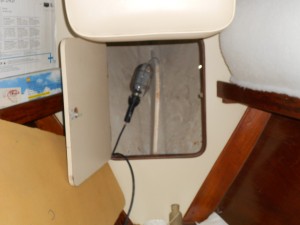 Way forward in the bow of the boat, accessible only from the forward “V” berth is a locker than holds the anchor rode and chain. On Second Star, the locker is divided in half to support two anchors and rode/chain as can be seen in this picture. Often the bottom of the locker has a drain pan which either empties to the bilge or through a hole in the side of the boat to the sea. Second Star drains to the bilge, except the hose was crimped and did not drain at all. Sea water would collect until the pan overflowed either into the bilge or onto the “V” berth. The drain hose was very small in diameter and emptied its contents into the bottom of the storage areas under the “V” berth, causing mold and odors. The solution was to remove the old drain, replace with a larger diameter longer hose and to seal the drain pan to the hull sides. These pictures document the details. 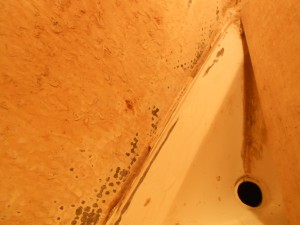 The locker pan is not sealed well to hull sides.

The large hole in the bottom center of the pan is the result of drilling out the old nylon hose fitting to remove the old drain hose.The new 1-1/2″ diameter smooth hose will attach there. The other end will drain to the bilge near the mast, leaving the storage areas under the “V” berth dry. Oddly enough but not uncommon appropriate limber holes were missing thus trapping pools of water behind gussets and bulkheads. I used a 2″ hole saw to remedy this so there is no trapped water anywhere in the bilges.

Some thickened epoxy was applied forming a nice gusset between the hull and pan. 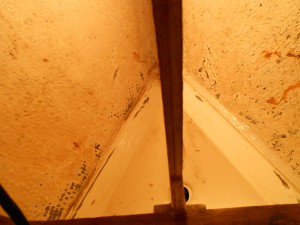 Fillet of thickened epoxy applied to seal pan to starboard hull side. 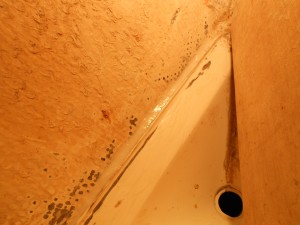 A fillet is also applied to port side.

The fillet is applied to port and other needed areas. 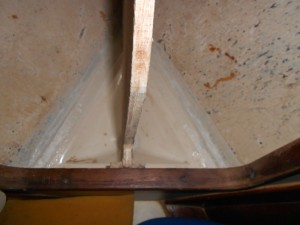 Fibreglass tape is then applied.

Fibreglass tape is applied over the fillet to bond the pan to hull sides and bulkhead with white pigmented epoxy.

The 1.5″ drain hose is threaded into the hole. This hose has a smooth interior and a hard plastic spiral rib on the exterior. With a angled cut in the pan, the hose screws into the pan. I then used thickened white pigmented epoxy applied around the hose at bottom of pan to form a screw in fitting for the hose yet not allow water to pool.

The last photo shows the exit end of the hose laying in the bilge just before the mast. 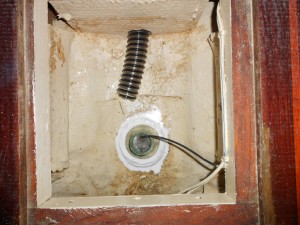 With the floor access board removed the non-removable depth sounder transducer can be seen clearly. I used excess thickened epoxy to seal the wood spacer pad for the transducer which is why it is so clean and white around it.